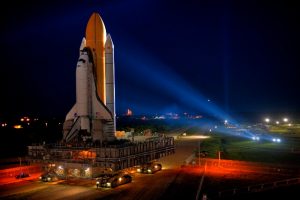 Selecting an effective replacement fire protection system for NASA’s crawler transporters, the largest self-powered machines in the world. They carried the Space Shuttle with 1,350,000 kilograms of rocket fuel; failure was not an option. Adding to the complexity were the number of hazards in various discrete spaces including sensitive electrical equipment, hydraulic, equipment and engine spaces with limited spare space and punishing vibrations which made protection extremely difficult. When designed they used a halon system which
had to be replaced. They also wanted a solution with no or low GWP.

What to use for a halon replacement?

The Solution:
NASA installed a NOVEC 1230 system. They were unaware of Stat-X when they made the decision. With the NOVEC installation they were unable to resolve piping leakage issues caused by the difficult pipe runs and vibrations. The NOVEC system also repeatedly failed room integrity test. They were unable to commission the system despite extensive efforts. They tore out the NOVEC and replaced it with a Stat-X at a dramatically lower cost for both shuttle crawlers.