The Elements of a Fire 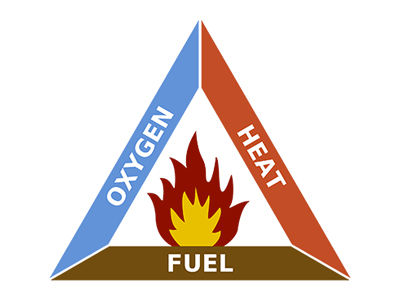 Initially, let’s examine the three components that must be present for a fire to start: fuel, heat, and oxygen. Whenever these three parts are present in the appropriate amounts and under the appropriate conditions, ignition will occur, and a fire will start. If one of the parts is removed, the fire will not continue to burn. This configuration is represented by the fire triangle.

The second phase we need to consider is what is required to sustain the fire after ignition. Once ignition occurs, a chemical chain reaction begins that allows the fire to continue to burn. Complex chemical interactions occur whereby the fire feeds itself and continues to burn until the fuel is exhausted, or, the fire is extinguished by some external action (i.e., someone deploys a fire extinguisher, it begins to rain, etc.). 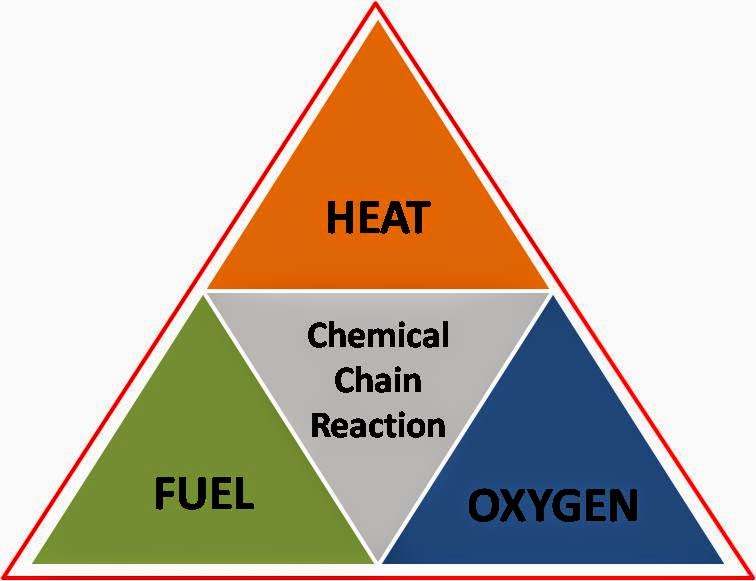 It is important to understand the elements or parts of a fire for a number of reasons. First, from a fire prevention standpoint, keeping these elements separate is a key way to prevent fires. Most home fire safety tips focus on controlling the heat side, i.e., managing smoking materials, not leaving cooking unattended, being careful with candles, etc.

Secondly, by understanding how the fire is created and sustained helps determine how to extinguish it. We know that if we attack and remove or sufficiently diminish one or more parts of the fire tetrahedron, the fire will no longer burn. All modes of fire extinguishment depend on this.

To explore this concept more fully, let’s look at each one of the fire tetrahedron components in detail.

Fuel is any combustible material, or simply, anything that will burn; this includes literally just about everything. Examples of noncombustible materials include things like masonry, glass, steel, and concrete[1] among a few others. Everything else can be considered as fuel for a fire. Most fires involve fuels such as wood, paper, fabrics, plastics, rubber, flammable liquids, cooking oil, and even some metals. 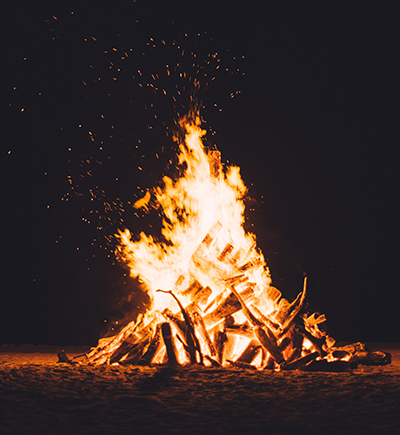 From an extinguishment standpoint, the fuel leg of the fire triangle can be challenging to control. Most fires eventually self-extinguish when they consume all the available fuel. While ultimately very effective, this mode of extinguishment is inefficient because few people want to wait for a fire to burn itself out.

However, there are circumstances where removing or altering the fuel is an appropriate form of extinguishment.

Some examples of using this method include:

When a solid fuel receives sufficient heat, it undergoes a process called pyrolysis. Pyrolysis is the thermal degradation of the fuel that results in flammable vapors being produced. It is actually these vapors that are burning as opposed to the fuel itself because only vapors or gases burn. Pyrolysis transforms the solid fuel into a gas (gasification) that will burn, and is the first step in the combustion process of a solid fuel[2].

The temperature at which pyrolysis occurs varies from fuel to fuel. The rate of pyrolysis is also influenced by the surface area of the fuel. The more surface area exposed to the heat source, the faster it heats and undergoes pyrolysis. For example, it will take significant heat and time to pyrolyze a piece of lumber. But if the same piece of lumber is reduced to sawdust, it will pyrolyze very quickly with far less heat. 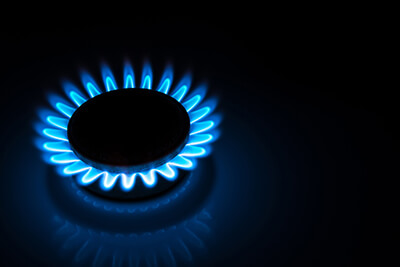 Heat can be supplied from many sources, but some of the more common heat sources that are known fire starters include:

These heat sources initiate the fire. Once the fire begins burning, as long as there is sufficient fuel, the fire will produce its own heat.

Whereas heat is critical for pyrolysis to occur with a solid fuel, it is also imperative for liquid fuels as well. Since only gases burn, flammable liquids are a step closer in their physical state to a gas than a solid. So for all intents and purposes, liquids are easier to ignite than a solid. But again, the liquid must first be transformed into a gas.

There is a second temperature value that exists although it is not used as frequently: fire point. The fire point is usually a few degrees higher than the flashpoint and is differentiated from flashpoint in that the sample continues to burn after the ignition source is applied.

There is one more heat value that impacts both solid fuels and flammable liquids: autoignition temperature. Autoignition is also known as spontaneous combustion. In this measurement, the fuel is gradually heated until it ignites without any ignition source. Since no ignition is present, obviously a significantly higher amount of heat is required to reach this point. Paper has an autoignition temperature of ~450°F[4], and wood self-ignites at ~400°F[5].

From an extinguishing standpoint, cooling is the best method for attacking the heat leg. This usually involves the application of water or a water-based agent.

Oxygen is the third component in the fire triangle. The air around us contains 20.9% oxygen which is far more than enough to support flaming combustion. If oxygen is removed or reduced sufficiently, the fire will go out. Think of placing a drinking glass over a lit candle.

Flaming combustion is possible until the oxygen content is reduced to 16%. At 16%, visible flames die down and the fire enters a smoldering state that continues to produce flammable vapors and heat. If oxygen is suddenly introduced to a confined, smoldering fire, an explosion—known as backdraft—can occur. 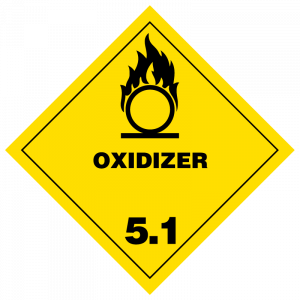 Oxidizers are all around us in a variety of common commodities such as ammonium nitrate fertilizer and pool chlorine. If an oxidizer is present, the combustion profile changes radically, and the situation can become dangerous in short order.

The power of oxidizers has been dramatically illustrated at various points in time throughout our history. Perhaps the most dramatic was the Texas City Disaster of 1947. In this incident, a ship carrying 2,500 tons of ammonium nitrate fertilizer caught fire at the Texas City pier. Workers attempted to seal off the fire to deprive it of oxygen. But, since an oxidizer was involved, this obviously was destined to fail.

After burning for several hours, the ship exploded with a force that destroyed over 1000 buildings, leveled an adjacent chemical plant, and blew an aircraft overhead out of the sky. The blast killed over 600 people including all but one member of the Texas City Fire Department[6].

In more recent history, a shipload of ammonium nitrate fertilizer was again the source of a disastrous explosion. A ship carrying 2,750 tons of fertilizer was abandoned at the port in Beirut, Lebanon in 2013. After being unclaimed and languishing for years, on August 20, 2020, the ship exploded for unknown reasons. The blast killed over 200 people, injured 6,000, and caused over $10 billion (USD) in damage[7].

To extinguish a fire by attacking the oxygen leg, the oxygen content must be reduced to a point below 16%. This can be accomplished by sealing off the fire area and allowing the fire to consume the available oxygen, e.g., placing a lid on a burning pan of oil. There are also extinguishing agents such as carbon dioxide (CO2) and other clean agents that displace oxygen and lower the oxygen concentration.

Once the elements of the fire triangle have been combined in the proper amounts and under the appropriate conditions, a fire will ensue. The mechanisms by which the fire continues to burn is represented by the fire tetrahedron. Through complex chemical interactions involving free radicals, the fire is self-sustaining and will continue to burn until extinguished or the fuel has been consumed.

Understanding how a fire begins and continues to burn is important. From a fire prevention standpoint, it is important to avoid placing heat-producing equipment in close proximity to flammable fuels. And from an extinguishment standpoint, these distinctions are crucial. It is critical to consider which leg of the fire triangle to attack and what is required to accomplish that.

Another important consideration in fire suppression is the fuel that will be burning or the class of the fire. Please click here to read our companion article Understanding the Classes of Fire and the Extinguishing Agents for Each.