What is Condensed Aerosol Fire Suppression?

Condensed aerosol fire suppression, a relatively new technology, is a system of aerosol containers or a single container, that are interconnected to each other and to a control panel, designed to extinguish fires in special hazard applications. Other special hazard fire protection systems including dry chemical, wet chemical, gaseous clean agent (halocarbon or inert gas), water mist, carbon dioxide and, in the past, halon systems are also used in similar applications.

Special hazard applications are those that are not appropriate for automatic sprinkler protection, either due to the fire hazard itself, or the contents that are being protected. Automatic sprinkler systems can damage sensitive information technology equipment, and even wet chemical systems, used to protect commercial cooking operations, can damage cooking equipment, and offer clean up challenges.

Unlike other special hazard systems, condensed aerosol suppression systems do not require a separate vessel for the agent itself, nor do they require an interconnected piping network to deliver agent. Condensed aerosol systems operate by smoke or heat detection, together with control panels, thermally activated, or manually operated with pull stations.

Despite the “fire triangle” discussed as early as elementary school (Figure 2), this model does not fully explain how a fire initiates and continues to burn.

The traditional fire triangle illustrates that heat, a fuel source, and oxygen are required for a fire to propagate. 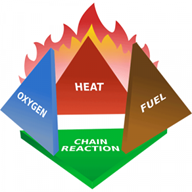 Figure 3:
Fire Tetrahedron
There is a fourth element, often not discussed, that is also required for a fire to propagate—an unmitigated chain reaction. This chain reaction is mostly the propagation of hydrogen ions reacting with other chemicals to produce heat. Figure 3 below illustrates the fire tetrahedron. A tetrahedron is a solid constructed of equally sized triangles and is the simplest three-dimensional object possible in geometry.

It is important to keep this tetrahedron in mind because condensed aerosol fire suppression extinguishes or suppresses fire primarily by disrupting the chemical chain reaction.

The sequence of operation of how condensed aerosols work are as follows:

The condensed aerosol pellet contains a proprietary mixture of chemicals which varies between brands.

NFPA 2010: Standard for Fixed Aerosol Fire-Extinguishing Systems is the primary standard that is used to design, install, and maintain fixed aerosol systems. This standard applies to the fixed systems that are used to protect stationary hazards, such as electrical cabinets and electrical switchgear rooms. The standard that governs the requirements of the components used within condensed aerosol systems is UL 2775: Standard for Fixed Condensed Aerosol Extinguishing System Units.