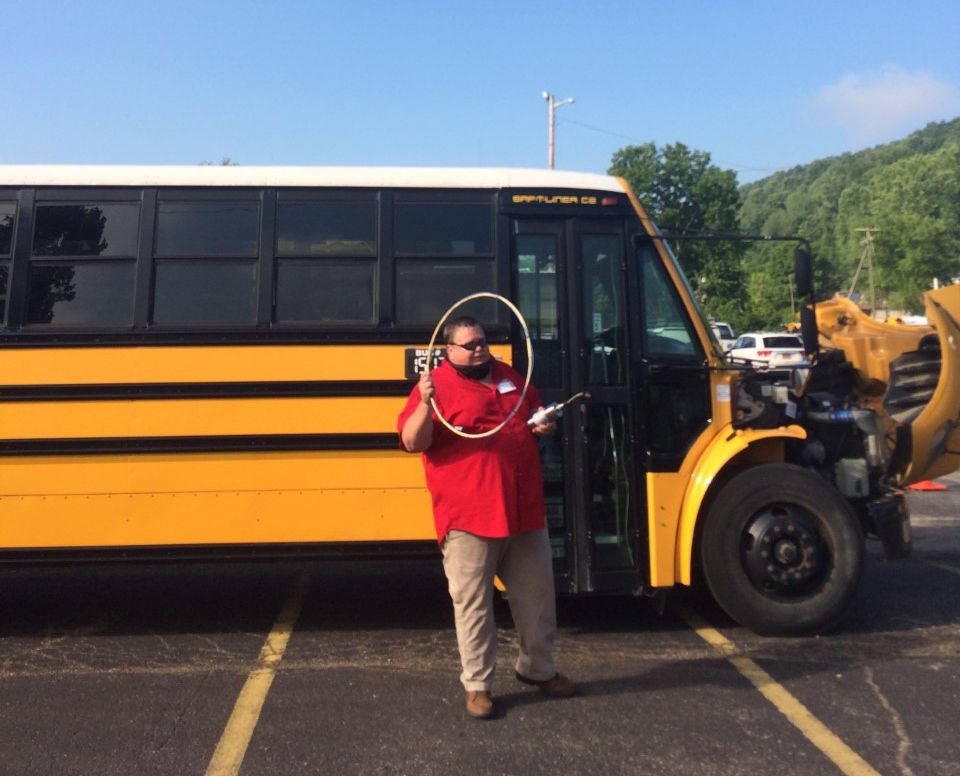 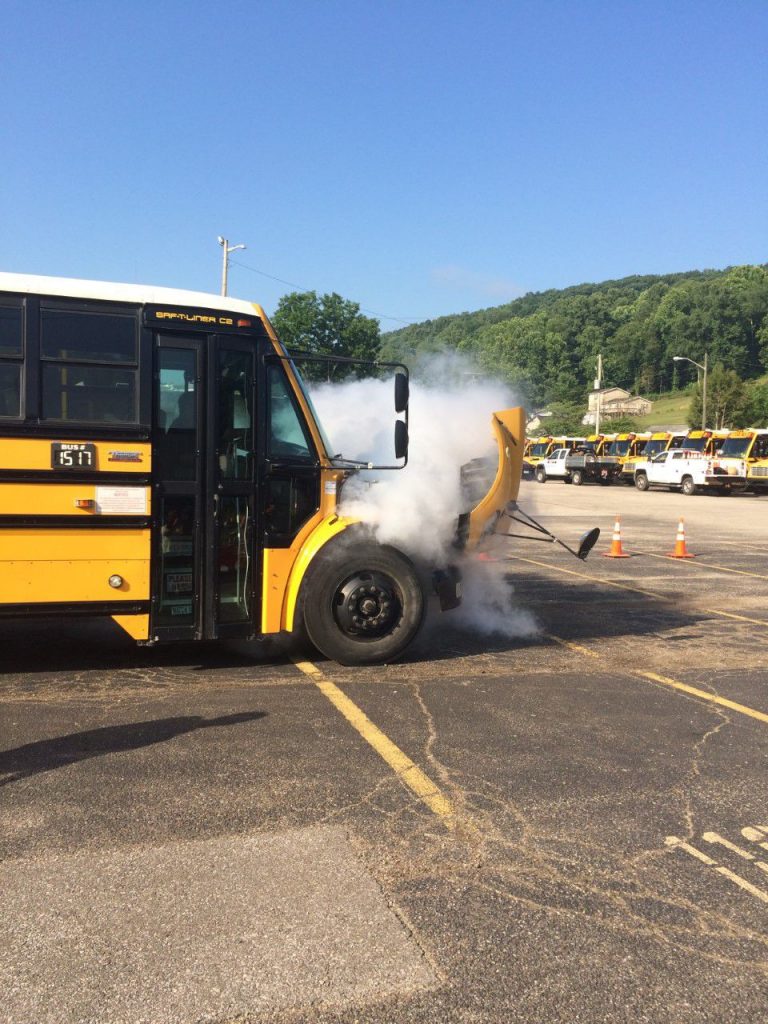 In just under one minute, the inside of a bus on fire can become uninhabitable, leading to the unthinkable.

And to prevent that horrific outcome, Kanawha County Schools’ Transportation Department hosted a demonstration of the FireGator fire suppression system. The program was presented on July 14 at the KCS Bus Garage facilities in Elkview.

Brian T. Lyons, national sales manager for FireGator, led a pair of demonstrations of the fire suppression system — conducted on a KCS school bus selected for the presentation — for onlookers.

“We started on a quest, evolving and researching and teaming up with Stat-X, which makes an aerosol generator,” Lyons explained. “It’s the heart and the soul of the system.”

The generator uses a potassium-based aerosol that creates a chemical reaction to put out fires. Lyons said it is used around the world by such agencies as NASA and the U.S. Department of Defense. “There are over a half a million of these guarding some of the most expensive assets in the world,” Lyons said. “This is approved for occupied and unoccupied spaces. It’s safe for human inhalation.”

The generator remains non-pressurized until activated. Activation can be made by the detection of a temperature increase by a halo component beneath the vehicle’s hood.

“Simplicity is the key,” said Lyons. “We monitor this with one LED, a green light on the dashboard.”

A manual activation switch is also placed on the dashboard.

Lyons said the National Fire Protection Association (NFPA) recommends buses have an approved system installed to detect a fire-related event, signal and discharge and have a manual means of activation.

Lyons said the demonstrations were “dry runs,” once with the bus’ hood open and the second time with the hood closed.

For additional notification and response, the system, when activated, employs a 113-decibel horn to alert passersby of an emergency. “You want to notify a passing motorist or everybody around that’s something happening. This horn is loud. The mindset behind that is to get passing motorists and everybody involved to stop at the bus and help give the kids an assist.”

The horn was activated during the second demonstration.

“It’s replaceable, simple, effective and made in the USA,” he said of the FireGator equipment.

Several Kanawha County Schools buses contain fire suppression systems already, but not the FireGator system, according to KCS communications director Briana Warner in a media release regarding the event.

“Kanawha County’s been a leader in the whole U.S. in this,” Lyons said of school bus safety measures. “They were one of the first to embrace some of the other technologies.”

He said the overall ownership cost of FireGator system would save $15,000 over a 10- or 15-year period compared to other systems.

“Here’s the kicker: Every special needs bus should have a fire suppression system,” Lyons said. “When you have a child confined to a wheelchair and strapped to a bus, he or she can’t get up and flee.”

He added the National Safety Transportation Board recommended last month that automatic fire suppression systems should be installed in every school bus in North America.

The process demonstrated by the FireGator representatives was lauded by some in attendance for the protection such systems can provide.

“What I would like to see is that all of the special needs buses throughout the state get fire suppression units on them. That gives you extra minutes to help those kids who aren’t mobile,” Stone said.

“I think it’s a great opportunity if it saves one child,” Kanawha County Schools electronic technician Jeff Hunley said after the viewing the demonstrations. “There’s no amount of money that’s too much if you can save the life of a child.”