Utilities are facing growing problems with manhole and underground vault fires throughout their network. They are encountering significant losses both in equipment destruction as well as in public relations as these fires lead to extended down time for customers in the network. 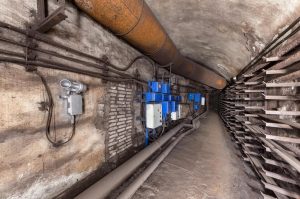 Electrical cabinets and other equipment in underground communication tunnel.

Fireaway Inc. is pleased to offer Stat-X fire suppression solutions for various types of manholes and underground vaults. Our Stat-X solution will be designed to meet the size and condition based on the environment. 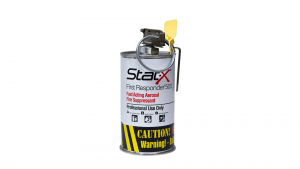 Most utilities have service trucks on the road with a crew of two underground workers. These workers are not active fire fighters but will respond to manhole fires to try to restore service. The Stat-X First Responder® is designed to be tossed into the burning manhole to suppress the fire and eventually restore service.

In the event the underground workers are on site when a fire breaks out and by chance one of the workers is in the manhole when this occurs and becomes incapacitated and trapped in the burning manhole, the partner worker will immediately deploy a Stat-X First Responder in the manhole. The fire will be immediately suppressed and /or extinguished. Since Stat-X aerosol is not harmful the trapped worker will not be harmed in the manhole while awaiting rescue. 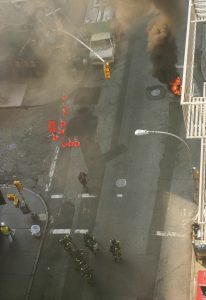 In the event of a fire in the vault, the Stat-X® thermal generators automatically activate by heat. The size of generator is determined by the cubic volume of the manhole/vault. The largest thermal generator is 1000 grams, covering a manhole or vault up to 565 cubic feet. The generator will be bracketed near or at the top of the vault aimed down to discharge and totally flood the manhole/vault, immediately extinguishing the fire. 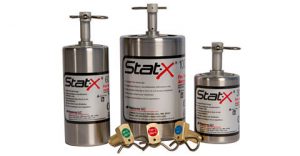 Stat-X thermal series with brass or aluminum, shown on generators with the brass version in front of the generators, thermal heads. 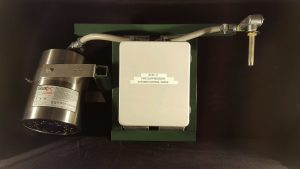 Use of a panel controlled system provides verification during inspection that system circuit continuity is present without having to disassemble connections and meter the circuit to insure no connections downstream are loose or disconnected. If there is a problem the panel will indicate which circuit requires corrective action. It also indicates if the battery is too weak and requires replacing. The panel can also actuate multiple generators for volumes that require more than one.

Automatically actuated systems where personnel may be present require a physical means of disconnect for the discharge circuit. This is accomplished using a covered toggle switch installed in the discharge circuit. The switch is mounted inside the enclosure on its back panel. Initiating this switch will create a fault / trouble condition in the panel. The audible indication and illuminated yellow fault light from the panel will serve as a reminder to the end user personnel to enable the discharge circuit by actuating the switch prior to leaving the area. This also simplifies this process because it requires no tools to accomplish.

The NEMA 6P rated enclosure and seal tight conduit is used to protect the panel from water intrusion due to occasional full submersion in the man hole.

A wide range of heat detector temperature settings are available. Temperature settings would be chosen based upon the end user needs. For example, proximity of underground steam lines to the manhole. Prefabricated uni strut support with enclosure, control panel, heat detector, and generator bracket reduces installation time for the following reasons.