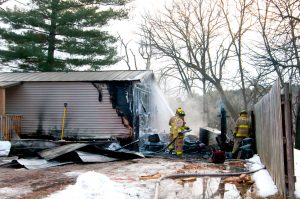 The quick response by the departments and use of Stat-X First Responder® fire suppression canisters enabled firefighters to contain the fire limiting damage primarily to the attached garage. No one was injured in the fire.

Units from New Richmond (WI) Fire & Rescue were first on the scene at a structure fire Tuesday evening, April 10, 2018 in Star Prairie Township. An attached garage at 1990 93rd Street caught on fire around 5:30 p.m. Units from Somerset Fire/Rescue joined the fight.

“We do know that, based on the resident’s statements, that he was trying to start his car in the garage with a battery charger and a fire developed,” said New Richmond Fire Chief Jim VanderWyst. “It is possible, and not out of the realm of possibility, that the battery charger could have been what started the fire. But we don’t know for sure. That is something his insurance agency will need to determine.”

According to VanderWyst, since the building was a mobile home, the fire was able to move into the crawl space and start racing around underneath the home. However, the fire department was able to catch the fire before it could get out of control.

The quick response by the departments and use of the portable Stat-X First Reponder® fire suppression canisters enabled firefighters to contain the fire limiting damage primarily to the attached garage. No one was injured in the fire. Firefighters were able to move a pontoon boat out of harm’s way although a significant amount of personal property including a car were lost in the fire.