When Chief Newman became chief of the Forest Lake Fire Department located just north of the Twin Cities in Minnesota he acted. He decided to purchase 3 carry cases complete with two Stat-X First Responders each. These equipped the chiefs’ vehicles. Now, they have also equipped the first “two out” engines. These two engines can deploy the units if the early-stage fire event is vent limited while the rest of the team deploys all of the equipment that is necessary for the fire attack.

The Forest Lake Fire Department has been using the Stat-X First Responder since 2018! Chief Alan Newman has the department well trained on the products’ use and deployment.

In their most recent success story, the Chief explained that based on scene response times, it was 6-8 minutes from the time of Stat-X First Responder deployment to the time of the fire being extinguished with minimal water using the Stat-X First Responder device. This tool generally reduces the amount of water needed to extinguish the fire, which directly relates to less damage.

Louise Dillon, marketing manager at Fireaway Inc. states, “we appreciate the unsolicited testimony from our valued first responders! The outcome was priceless – ‘two children escaped the fire’ plus the bonus fact that the fire was extinguished with limited water damage to the home.”

As stated in the Twin Cities Pioneer Press article, ‘Forest Lake fire officials were able to quickly put out a townhouse fire on Friday, March 19, 2021, because Assistant Fire Chief Mike Swenson deployed a Stat-X® aerosol fire suppression tool as soon as he arrived on scene.’ 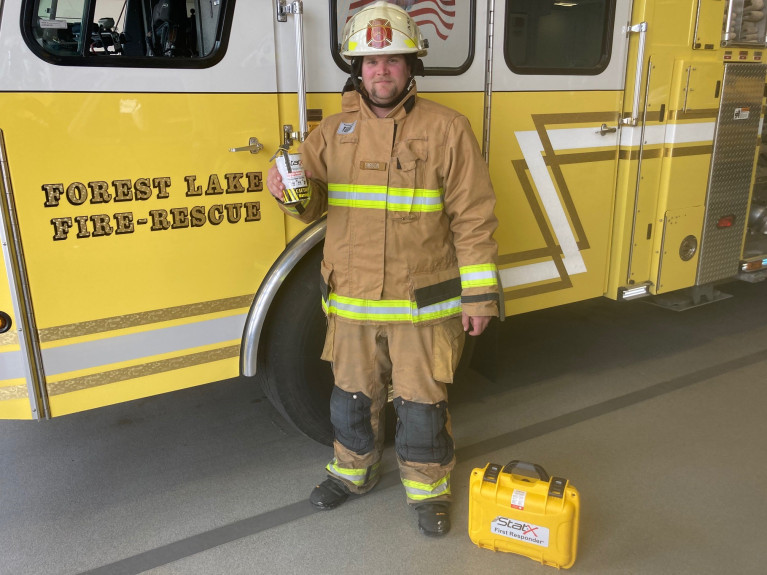 This is not their only successful story. His team also used this tool on a chimney fire about 6 months ago in Scandia, where they dropped the device into the chimney from above. They have also used this device to extinguish a garage fire in Columbus, Minnesota! The fire in the garage was much larger than the early-stage fire the product is promoted to suppress. It was a large fire, and this tool suppressed the fire.

During our conversation, Chief said, “Stat-X® was instrumental in the successful outcome of this fire event. The result was ‘amazing.’ He is ‘sold’ on the product more than ever. He is currently planning to expand the use of the product in his area.

We would also like to thank our distribution partner, Jefferson Fire & Safety, for their passion in the fire and life safety mission.